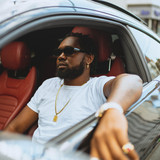 Born Kemar Donaldson in Montego Bay, Jamaica, singjay Kranium was schooled in the ways of reggae in his teens, after a move to Miami brought him closer to his uncle/mentor, dancehall singer Screw Driver. Kranium first broke out in 2013 with the hit single "Nobody Has to Know," an independent release that attracted major labels. Atlantic talked to the artist in 2013 and came calling again in 2014; then, in 2015, Kranium joined Sean Paul and Wayne Wonder as one of the few reggae artists signed to a major label. Atlantic re-released "Nobody Has to Know" that same year while Kranium entered the studio with producers Ricky Blaze and LMR and released his debut LP, Rumors, yielding singles like "Stamina", "Lifestyle", "Between Us" and a Ty Dolla $ign and Major Lazer/KickRaux-assisted version of his hit "Nobody Has to Know." In 2016, Kranium released " We Can " featuring Tory Lanez and

"Can't Believe," another Dolla $ign collaboration that also featured WizKid, was released in early 2017. In the past few years, Kranium has travelled the world to perform and