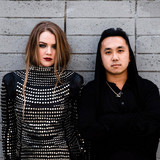 Named for the various elemental twists that rain storms take — from a light inconvenient drizzle to an unequivocally torrential downpour — rising alt-pop duo RAINNE are drenched in emotional catharsis to their core. A weighted darkness is felt everywhere in the Los Angeles-based duo’s sonic universe: the classically trained pair — comprised of singer-songwriter Annie Dingwall and saxophonist/engineer Justin Klunk — blend a sophisticated pop songwriting prowess (and penchant for ear worms that cut) with a late-night-drive of a West Coast mystique that could easily soundtrack grim L.A. staples like Nightcrawler, Drive, or Mulholland Drive. The band’s heady live show has become a must-see in the Los Angeles circuit, with a recent performance at the Hollywood Bowl, where they performed during the We Can Survive benefit concert that featured sets by Taylor Swift, Billie Eilish, Camila Cabello, Marshmello and more.

The Recording Academy profiled the band on Grammy.com, and called them “L.A.’s dark-pop duo on a meteoric rise.”