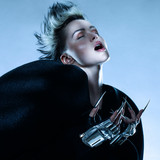 Brought up in the subculture of London, now living in Los Angeles, Viktoria is known for her multi-disciplinary approach to future-pop and performance art with a post-human edge. Her work bridges music, body art, sculptural tech-fashion, and an otherworldly narrative first on display with her viral hit video ‘Prototype’ and introduced her as the

‘world’s first bionic pop artist'. Her life story has been recognised around the world as a testament of human strength and a truly transformative approach to modern identity with the highlight spotlight of Barack Obama as recognising her as 'Personal Frontier' featured in WIRED magazine. She first gave us a fresh and glamorous perspective of post-disability in a cultural way when she performed as the Snow Queen during the closing ceremony of Paralympics 2012 wearing a diamond-encrusted prosthetic, which led her to be discovered by Channel4 in the UK for the iconic ‘Prototype’ #BornRisky campaign video. Her distinctly elegant and futuristic character and outspoken wit has attracted features in many worldwide fashion and art publications, as well as exhibitions and documentaries.