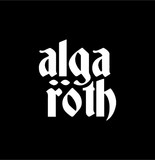 Algaroth, a five piece blackened metal band from Melbourne, Australia. Algaroth began to take shape in 2017. Bass player and lead songwriter, Benn Gaylor and guitarist, Ben Sifonios made the decision to work on a new metal project. The two had previously performed in heavy bands together and still felt a desire to create honest, heavy and very dark music without trying to fit into any genre or scene. Gaylor and Sifonios would call on more close friends from their respective music circle and Drummer, Aaron Holmes along with guitarist Jordan Andrews and the band’s frontman, James Macrae would soon round out the lineup, and from here, Algaroth was born of fire.  After a year of maniacal writing, rehearsing and tediously working to create a sound that would become uniquely their own, Algaroth enlisted the help of Adrian Horsman (In Trenches, Death In Bloom) and in the belly of Horsman’s Wolfenden Studios, the quintet recorded their first EP, a vicious and menacing beast entitled 'AWAKEN' which saw its release in January 2019. This quickly followed by ‘THE LIFE BENEATH’ (July 2019) continuing the narrative established by ‘AWAKEN’ - off the back of these two releases Algaroth utilised an opportunity and recorded a “AWAKEN! THE LIVE BENEATH’ A live album consisting of tracks solely from their first two releases, hence the name. In 2020, Algaroth finally entered the studio to complete the three part narrative of extended plays with “IN THE ALL PLACE”