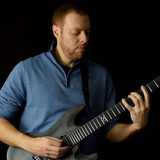 KillrBuckeye (Chris Cundy) is a metal guitarist from Detroit, Michigan. Active during the early years of YouTube, he gained a loyal following by recording accurate covers with good sound quality at a time when most others were using built-in camera microphones to capture audio. Two original compositions were written and recorded in late 2008 (“Arrival”) / early 2009 (“The Rising”) and were well-received by the YouTube community, accumulating millions of views to date. What followed was a 10-year hiatus during which he focused on his family and career as an engineer. In 2019 he made a return to YouTube with a new original song (“Inner Balance”) written in collaboration with and produced by Finn Maxwell (a.ka. Musicman1066). KillrBuckeye is widely credited with inspiring a new generation of metal guitarists and helping to pioneer the YouTube metal guitar community.