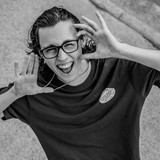 Australian born, Seaning is a rapper, songwriter, producer and member of the hip-hop movement established in Darwin, MSON (Making Something Outta Nothing). Born in Alice Springs, Northern Territory yet raised in Darwin. By 16, Seaning had begun recording and releasing music, a series of singles including his stoner anthem, Blazing Edge (2020) and began rising as a hip-hop artist in the Northern Territory. Intent on further pursuing a career in music, he goes on to produce tracks with the hip-hop group, MSON (Making Something Outta Nothing)