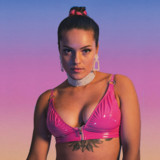 Nora Ekberg, better known as Little Sis Nora, is a Swedish artist, musician and songwriter born in the year of 1996. She got her artist name, Little Sis Nora, from starting her professional music career by singing and performing on songs and starring in music videos produced by her older brother Aron Ekberg, a.k.a AronChupa. Nora has consistently been touring on several continents since the breakthrough in 2014 with hit song ”I’m an Albatraoz”. The song has been streamed on YouTube over 1,2 billion times, and adding the following singles Nora has been streamed over 2 billion times on musical platforms around the world.