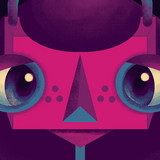 Featuring Pihka Is My Name

band is fronted by an animation character called Pihka. She is a small robot, an imaginary friend who is not needed anymore. She finds herself forgotten in a snow covered forest, sets off on an adventure on her own and all the busy humans with their problems. Pihka Is My Name is a project of PihkaSound, a Helsinki-based production duo. It consists of composer/pianist Henna Helasvuo and producer/sound designer Lasse Turunen. They released their debut album ‘Everything Is In Between’ in March 2021. https://pihkaismyname.com https://youtube.com/c/PihkaIsMyName