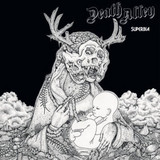 Shake off your mortal coil, says Death Alley. After a period of relentless touring and turmoil, the Dutch powerhouse is re-invented, re-born, and ready to take on the world with their refined brand of infectious yet challenging rock n' roll. Set for release in March 2018 through Century Media Records, 'Superbia' is the follow-up to the 2015 debut album 'Black Magick Boogieland'. Formed in Amsterdam in 2013, Death Alley is a rare mix of punk attitude and diligent, musical precision. As crossover as it gets while still keeping focus – the fourpiece holds King Crimson as close to their hearts as The Stooges; Hawkwind and Poison Idea are loved in equal measure; the acid flows, but this ain't no hippie band. Fueling this relentless machine of seeming contradictions is a pure love for great music, and a restless thirst for the deep end of the pool. No risk? No reward. First you acknowledge that coil around your neck, then you shake it off. On stage Douwe is flanked by guitar prodigy Oeds Beydals and the latest addition to the group - bassist Sander Bus. Oeds first made a name for himself in the now legendary Dutch rock band The Devil's Blood. Anchoring the line-up since 2016 is Swedish drummer Uno Bruniusson, most notably known for his work in In Solitude and Procession. Together they have a reputation as one of the most energetic live acts on the contemporary rock scene.