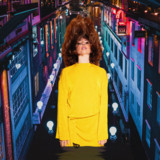 Sohodolls was founded in 2005 by Maya von Doll (New Pharaohs) who had moved to London from Lebanon as a child being airlifted by the British Royal Forces from the war-torn country. The band’s first two singles, Prince Harry and Stripper caused enough of a stir to reach #7 and #’12 in the UK indie charts. These were followed by the classic No Regrets, which won acclaim from The Fly to Clash and NME. Then there was the She Wants Revenge support in July, a performance at Hugh Heffner’s Playboy party in Moscow in August, The Big Issue’s 15th anniversary concert in September, and a date alongside The Horrors at NME’s ‘Rock ‘n’ Roll Riot Tour’. In 2007, Sohodolls went on a 34-date headline UK tour to promote their debut album Ribbed Music for the Numb Generation. The album received rave reviews from the NME, Artrocker and a myriad of online music magazines. The brilliant accompanying remix of Trash the Rental by Crystal Castles was a big hit at electro clubs worldwide. Sohodolls’ UK profile increased considerably after they supported Daft Punk and The Klaxons at the London and Leeds O2 Wireless festivals. Sohodolls have played headline shows in Moscow, LA, Istanbul, Rome, Berlin, Paris, Barcelona, Vienna, Brussels, Milan, Turin, Hamburg, Madrid, Piza, Köln, Oslo, Munich – as well as every town and city in the UK. They have also toured with or supported IMAX, Ladytron, Vive La Fête, She Wants Revenge, The Magic Numbers, Soulwax and The Charlatans.