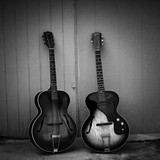 Roscoe and Etta are the cranky old guitars on which Maia Sharp and Anna Schulze wrote their “self-titled” new album "Roscoe &amp; Etta." Maia Sharp has had her songs recorded by The Dixie Chicks, Bonnie Raitt, Cher and more.

She has seven solo releases and one collaborative project with Art Garfunkel and Buddy Mondlock that have each been critically acclaimed and embraced by press and radio. Anna Schulze has had her songs featured in the Oscar-winning documentary "Icarus," Carmelo Anthony’s "This Is Melo," and MTV’s "Awkward." She has five solo releases, the latest of which, "Pickford Market,"