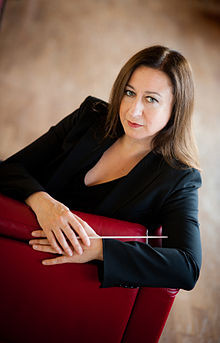 Simone Young is an Australian conductor largely associated with opera. While it is tempting to single her out for her many accomplishments as a woman triumphing in a traditionally male-dominated field, it is fairer still to assess her career as remarkable for anyone regardless of gender. That said, one can't quite ignore the barriers she has torn down: she is the first woman to conduct the Vienna Philharmonic (2005) and the first to lead the Opera Bastille, Vienna Volksoper, and the Vienna Staatsoper. Young's repertory is quite broad and ever-expanding: she has led performances of a spate of Verdi operas (Aida, Falstaff, Don Carlo, Rigoletto, La Traviata, Il Trovatore, Un ballo in maschera, and Simon Boccanegra), as well as a range of others by Mozart (Don Giovanni), Puccini (La bohème), Wagner (Tannhauser, Tristan und Isolde, and Die Meistersinger), Janácek (Kátya Kabanová), Richard Strauss (Der Rosenkavalier), Gilbert and Sullivan (The Mikado), Berg (Lulu), and many more. But Young also regularly conducts orchestral concerts featuring much of the standard repertory, as well as works by little known figures like composer/conductor Julius Burger, to whom she devoted an entire CD in 2006 on the Toccata Classics label. Speaking of her recordings, Young has been especially active in the studio in the new century, having made recordings for Oehms Classics, RCA, and Melba Recordings. Simone Young was born in Sydney, Australia, on March 2, 1961. After studies in piano, composition, and conducting at the Sydney Conservatorium, Young started her career as a repetiteur at the Australian Opera in 1983. She later worked as an assistant to James Conlon (Cologne Opera House) and Daniel Barenboim (Oper Berlin and the Bayreuth Festival). She rose quickly, soon getting engagements at the world's leading opera houses, including at the Met and Covent Garden. Meanwhile, she developed her career on the concert stage, taking on the post of principal conductor of the Bergen Philharmonic Orchestra (1998-2002). Young was chief conductor at Opera Australia from 2001-2003. In 2004 she was awarded the rank of Member of the Order of Australia by the country's Governor-General for her artistic contributions. In 2005 she accepted the dual appointment of general director at the Hamburg State Opera and chief conductor of the Hamburg State Philharmonic Orchestra. In 2011, she was awarded the Bernard Heinze Memorial Award. Among Young's later recordings are symphonies by Bruckner and Mahler, as well as the music dramas of Wagner, on Oehms Classics.