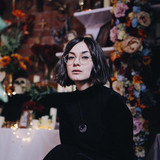 “LIO’s music is best described as enchanting. Lead-singer Leonie pulls you in with her intoxicating vocals and firmly keeps you in her grasp until the very last song. I’m not a religious person but watching them perform their ambient, mellow indie-pop is almost spiritual.” - Tipping Point UK Netherlands-born, Sheffield-based LIO creates ambient alt-pop FFO Florence and the Machine. With her eclectic sound and powerful live performances, she has supported high-profile acts such as Orchards, Skinny Pelembe, Slow Club, Our Girl and While She Sleeps. It’s safe to agree with BBC Introducing Sheffield that LIO has had an incredible 2019. From a Tramlines Festival debut on T’Other Stage to a packed 24 Kitchen St. at Liverpool Sound City, a second sold-out Sheffield headliner at Record Junkee and an LA Music Video Awards ‘Best Dance Video’ Nomination for ‘Growing Pains’. ‘Burn’, LIO’s third single, was furthermore included in the BBC Introducing Hot List as one of 21 fresh new artists to be discovered and the BBC Introducing Sheffield’s Top 50 Tracks of 2019. 2020 will see the release of LIO's debut EP, recorded at Steel City Studio and supported by Help Musicians UK's Do It Differently Fund. "The only thing as good as LIO’s music on record is LIO’s music live. LIO has had an incredible year and justifiably so, 'Burn' is stunning." - BBC Introducing Sheffield