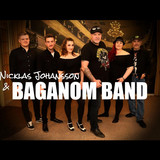 Nicklas & Baganom Band is a band from southern Sweden. They write their own music, mostly Blues, Rock, Funk & Soul, inspired by their own and other peoples lives around them. The music is performed mostly in Swedish, based on the soulful but yet heavy guitar, riffs with attitude and guitar solos that won't leave you unaffected.

The band formed in 2012, but after a shaky start it reformed in 2015 and the band released their first album " Måndag igen" in 2017. At the end of 2018 the band released their second album "Fri som en fågel" which was released on Spotify in February 2019. The band received a lot of attention for a song on their first album, Måndag igen, called "Våldets Huvudstad". The song, which is criticizing the violence among people in their hometown Malmö and the many shootings that had shook the town for a couple of years, spread around Scandinavia and went viral on facebook reaching over 240 000 views in just a couple of weeks. With influences from great artists like Joe Bonamassa, Eric Clapton, Roffe Wikström, Totta Näslund, Eldkvarn, Whitesnake & BB King the band is growing more and more for each day. "-For a small familyband like us, it would be interesting to se how far we can take this. No one will know unless you'll find out. As long as people appreciate our music, we will continue to play." Said bandleader and songwriter Nicklas Johansson to the newspaper TA in an interview 2016.