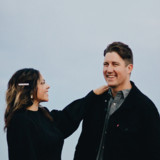 Unveiled Worship, founded by Brian and Kristen Ming, is a collaborative worship movement of song writers and producers who release worship to empower and equip a generation to encounter God’s presence. After a live recording at Christ for the Nations Institute was cancelled due to the COVID-19 pandemic, Unveiled Worship decided instead to go a different direction and do a studio album. With new songs in response to what they see as the beginning of Jesus’ eminent return, they collaborated with worship leaders who bare similar spiritual DNA to release their first studio project, Every Heart, along with several singles following.