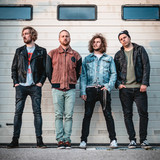 With their unique blend of 90s Indie Rock, Pop Punk and Emo, British-German band Cadet Carter have made a name for themselves on the Alternative scene around the world. The four-piece has released two full-length albums so far, 2018's Cadet Carter and 2020's Perceptions, through well-known independent music label Uncle M Music. Additionally, they have been touring constantly, joining artists like The Faim, Stand Atlantic, Touché Amoré, Basement, The Dangerous Summer, and Dave Hause on their respecitve tours. During the Covid 19 pandemic, Cadet Carter have released a brand-new EP as well as their most recent single The Best Part which managed to be included in various well-known Spotify playlists and push Cadet Carter to the next level.