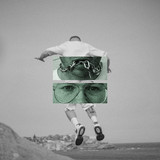 The son of music teacher parents, and brother to four working musicians, Dunn’s musical bloodline is strong. He grew up on piano lessons, string ensembles and family jams – with a soundtrack of Elton John, Billy Joel and Queen spinning in the background. While studying music at university, Dunn began to flex his production skills and dip his toes into electronic sounds, developing his own music and ghost writing and mixing for various artists. And soon he’d become his own one-man production studio. “I could play a lot of the instruments already, so I began recording everything myself. And then I introduced the organic electronic elements,” explains Dunn. It was later that Dunn found his singing voice. “I always thought you had to have a big, powerful voice to be a singer,” he says. “But then a friend gave me a copy of Bon Iver’s For Emma, Forever Ago, and I thought, ‘Oh yeah, he sings like me’.” For the past four years, Dunn’s been producing music under his current ‘Xavier Dunn’ moniker. Dunn has also flexed his songwriting skills in the cowrite role, penning tunes for Jack River (‘ Fools Gold’, cowrite/produced); NGHTMRE &amp; Carmada (‘Embrace’, cowrite/vocals), SUPER CRUEL (‘November ft. Lisa Mitchell’, cowrite); and Nina Las Vegas (‘Deserts’, cowrite).