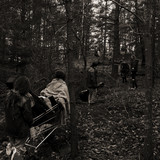 The dream of WoodsFolk was to make music with vocals in the foreground, heavily rooted in the Americana and folk genre with influences of World Music. Through talks and jam sessions the concept of a flexible collective where the common ideals would resonate and the individual particularities would bring flavor was born. As such WoodsFolk is a melting pot of musicians from Sweden, Norway, Finland, Belgium and Argentina. The curious and skilled band members all have experience with other bands and projects with a broad variety of genres. Most are also composers and multi instrumentalists in their own right. These special connections also led to the post-apocalyptic folk-rock theme they adopted for their debut Album “WoodsFolk” released autumn 2018. Since 2016 WoodsFolk wandered towards the sound and concept expressed in their first album. Going from an acoustic quartet to a full band of seven, the music was reshaped from progressive indie folk to what they now describe as post-apocalyptic folk-rock: A sound that borrows from the past to look into the future. The last two years WoodsFolk has been working on new material. The music will be released during 2021. The music is influenced by the West African Desert blues to once again end up in the fauna of Swedish primeval forests and barren landscapes.