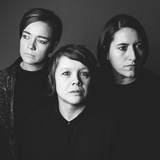 LIINES are Manchester-based post-punk trio. Voted Manchester Evening News Breakthrough Act 2020, LIINES have built a reputation as one of the most exciting acts to emerge from Manchester in recent years. Their latest release is Keep on Going (Sept 2021) which is out to rave reviews ahead of live dates in September before they disappear to finish their much awaited follow up to Stop - Start. Their last single Sorry – the A-side to a physical release with On and On – released in 2019 was been John Kennedy's XPosure Record of the Week on Radio X and was played by Lauren Laverne, Gideon Coe, Tom Robinson and Chris Hawkins on BBC 6 Music. It features on a number of Spotify playlists New Punk Tracks, Punk Unleashed and more, amassing more than 100k streams. LIINES released debut album, Stop - Start through Reckless Yes in 2018, which includes singles Shallow, Cold, Find Something,following Disappear / Be Here, Blackout and Never There. In 2019, LIINES supported Sleaford Mods on their 30 date UK tour and gained many fans in the process, played a string of festivals including Glastonbury, Bluedot and Kendal Calling, and played a number headline dates. Comparisons range from Savages, Sleater-Kinney and Joy Division to Pixies and Gang Of Four. Follow LIINES' spotify profile for latest releases and their social media for releases and live dates.