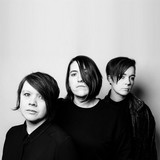 LIINES are Manchester-based post-punk trio. Voted Manchester Evening News Breakthrough Act 2020, LIINES have built a reputation as one of the most exciting acts to emerge from Manchester playing frenetic, electric shows across the UK and Europe. Their most recent single Sorry is A-side to a physical release with On and On – which was released in 2019. Sorry has been John Kennedy's X-Posure Record of the Week on Radio X, played on BBC 6 Music and more. It features on a number of Spotify playlists New Punk Tracks, Punk Unleashed and more. LIINES released debut album, Stop - Start through Reckless Yes in 2018, which includes singles Shallow, Cold, Find Something,following Disappear / Be Here, Blackout and Never There. In 2019, LIINES supported Sleaford Mods on their 30 date UK tour and gained many fans in the process, played a string of festivals including Glastonbury, Bluedot and Kendal Calling, and played a number headline dates. LIINES have enjoyed a lot of support from the likes of John Kennedy (Radio X), and BBC 6 Music DJs Steve Lamacq, Tom Robinson, Gideon Coe and Chris Hawkins, and more. Comparisons range from Savages, Sleater-Kinney and Joy Division to Pixies and Gang Of Four. Follow LIINES' spotify profile for latest releases and their social media for releases and live dates.