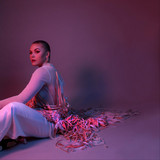 MaVe, alias Marita Vestad, is an artist and songwriter originating from the small village of Ringebu, Norway. She makes electronic music consisting of heavy bass, emotional lyrics and a powerful, unique vocal. MaVe’s distinctive sound combines elements from trap, ambient electronica and trip hop and with a background in rock music she stands out from the quickly growing electronica scene.   MaVe has, since her debut in 2014, independently released multiple singles and music videos, which has led to gigs and support slots both in the UK and Norway. The list includes acts such as BIGBANG(NO), AMBER RUN(UK), FRØDER(NO), MARIANN ROSA(NO), as well as the French electronica artist OWLLE in a sold out Sebright Arms in London.   In September 2017, she released her single «Bombs» in collaboration with producer Are Næsset and indie label R:E Records. Since featured on the TV-show «Jævla Homo» on NRK (Norwegian BBC), the single has been recommended by P3 Urørt and NPS music, A-listed at RadioNova and played on leading radio channels such as P3 and P1.