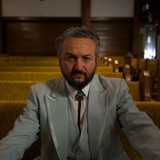 Fernando Viciconte-the 2016 Oregon Music Hall of Famer with twenty years of local and national acclaim under his belt-crawls from the wreckage of the recent past unbowed, bruised but unbroken. He has survived major surgery for a throat condition and thus what could have been existential silence for ‘that voice’. It’s a voice that caused countless rags like Billboard, Magnet, Paste, The Oregonian, No Depression (and on and on) plus fellow musicians like Peter Buck from REM, Don Dixon, and Steve Wynn to rave wildly about the feeling it evokes when he’s singing his songs of dark despair and faint hope. These rock n roll laments, in both Spanish and English have captured the imaginations of his hometown for seven records, countless compilations, and memorable shows. Now Fernando–and ‘that voice’ –has emerged stronger than ever with a full-length LP entitled “Leave the Radio On”, produced with Luther Russell & Mike Coykendall as well as several major tours w/ The Jayhawks, Mark Eitzel, Dan Stuart, Richmond Fontaine, Delines. The new album features a virtual who’s who of Portland’s finest musicians, including Peter Buck and Scott McCaughey of REM and members of M.Ward, Elliott Smith, Richmond Fontaine and The Delines. This is a new chapter in Viciconte’s ever-evolving musical trajectory, a career marked by creative integrity and an almost painful honesty which attracts fans from high and low that still believe in the redemptive power of rock and roll. And ‘that voice’.