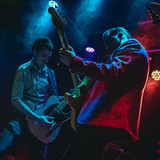 Like many good stories, Gentlemen Jackals’ began in a dark, windowless, soundproofed room in Fife, Scotland... Eager to put their musical skills to the test, bass player, Scott Thomson, and guitarist, Craig McMahon - friends since primary school - responded to an online ad seeking musicians for an informal ‘jam session’. This led the pair to brothers Callum and Kieran Bell, who they met in the aforementioned rehearsal space for the first time in the summer of 2015. The group were soon joined by Mark Wilson on vocals and bonded as they cobbled together chaotic interpretations of classic rock and blues numbers. The fivesome performed together for close to a year under the name ‘Scatter Kid’ before deciding to part ways. Callum and Kieran would later go on to form The Decrees while Scott, Craig and Mark decided to begin a band of their own. The trio recruited Mark’s childhood friend, Douglas Harden in late 2016 and soon the new band were ready to play their first gig… their only hurdle being their complete lack of name. Vowing one evening to not leave until a name had been decided, they stood in the rain outside their practice space throwing around suggestions. After dozens of vetoed options, Doog landed on ‘Gentlemen Jackals’. In unanimous agreement, the group picked the name because it perfectly captured what the band is all about: exploring the junction between buttoned-up, ear-pleasing pop, and the abrasive bark of fuzzy power chords and chiming riffs.