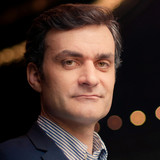 The Serbian-American pianist Ivan Ilić received degrees in mathematics and music at the University of California at Berkeley before moving to Paris in 2001. He was awarded a Premier Prix at the Conservatoire supérieur de Paris, then continued his studies at the École normale de musique with Christian Ivaldi and François-René Duchâble. His studies were supported by foundations in the USA, France, and Serbia, and the City of Paris sponsored his first recording. Career highlights include recitals at Carnegie Hall, New York, the Wigmore Hall, London, and Glenn Gould Studio, Toronto, and he recently gave recital débuts in Vienna, São Paulo, Geneva, and Berlin. His discography includes critically acclaimed recordings of the twenty-four Preludes by Claude Debussy (2008) and twenty-two Chopin Studies for the left hand by Leopold Godowsky (2012), as well as The Transcendentalist (2014) and For Bunita Marcus by Morton Feldman (2015). His recordings are regularly broadcast across six continents, and his videos of Godowsky’s Chopin Studies have attracted more than 500,000 views on YouTube. In recent years Ivan Ilić has broadened the scope of his approach. In 2011 he acted in two French short films: Luc Plissonneau’s Les Mains and Benoît Maire’s Le Berger. He has co-produced several five-hour radio series for Swiss Radio Espace 2 and also writes about music: recent articles have appeared on the websites of Gramophone, BBC Music, Music &amp; Literature, and Limelight. www.IvanCDG.com