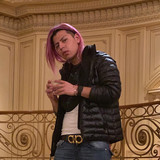 Arthur Sanchez now knows as Kanashii , born Arturo Macias Sanchez, is a Bay Area native hip-hop and Latin trap artist who aspires to change the sound of hip-hop with his diverse styles and flows, which have already captivated many people across the globe. Kanashii began his journey at only 4 years old, knowing that music made him different and happy. At a young age, he began saving money and working on weekends to afford a time slot at a professional recording studio. In 2012, he used the money he had saved to record his first song, “Ive Been Watching you,” at UGMX Studios in San Jose, CA. At 12 years old, he had his first professionally recorded song and began to share his sound and grow his name, “LilAmMusic,” on SoundCloud and social media platforms. However, his steady rise came to an end in late 2013, when he lost his grandpa and decided to take a break from music. After being absent from the music scene, he came back stronger and more focused in 2018, with a new look, style, and name, “Kanashii .” He quickly managed to land features with artists from Colombia, Slovakia, Toronto and New Jersey, creating tracks which he plans to drop later in 2020. As he continues to evolve his sound and drop music left, right and center, Kanashii might just be your next up-and-coming favorite artist.