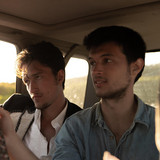 HEY MAJOR is formed by the two multi-instrumentalist brothers, Mickaël and Raphaël Fortin.

Built on strong brit rock influences, the chemistry and history between these boys is audible from the first note, writing what they’ve coined to be “elegant rock.” As teenagers in May 2015, the brother’s won Canada’s Searchlight contest as “Best New Canadian Artist” among 3000 acts across the country and followed this accolade with a second-place finish at the International Songwriting Competition in Nashville a year later.