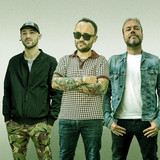 La Phaze is a French band founded in 1999 by Damny Baluteau (vocals, keyboards, bass) and Arnaud Fournier (guitar). Their sound fuses drum & bass and punk rock, forming a powerful blend of electronic beats and guitar-driven music that can be witnessed in their energetic live shows. La Phaze made their debut in 2000 with the EP Cushy Time, followed by the full-length album Pungle Roads in 2002. These releases established the band as an essential fixture of the French scene with their unique mix of jungle, punk guitars and ragga vocals, a combination style that they call ‘Pungle’. La Phaze then signed with the leading independent label Because Music to release its second album Fin de Cycle in 2005. Guillaume Rousé (aka Rouzman) joined the band as a drummer when the third La Phaze album, Miracle, was released in 2008. It was later followed by Psalms and Revolution in 2011. After two years of intensive touring, the musicians decided to split up in 2013. In 2018, it was time for La Phaze to be born again - Damny and Arnaud joined forces and welcomed the newcomer Speaker Louis. After a summer tour, they recorded a new album Visible(s), which was released in October 2020 on the French label At(h)ome. In 2021, they showcase a more electronic side of their music, with a series of remixes, special versions and original tunes. Still loaded with heavy guitar sounds, the band is returning to a more digital vibe, fully in touch with their history and with a forward-thinking attitude.