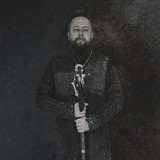 Danheim is a Nordic folk/Viking inspired project from the Copenhagen-based Danish producer Mike Olsen, a man with 8 years of experience in electronic and ambient music – focusing on Nordic Folk and Viking age inspired music with a certain Nordic authenticity or mood. Danheim’s music is often composed of ideas and stories based on the darker side of the Viking period, inspired or consisting of Nordic Mythology, old Danish folklore, and a vivid imagination. Danheim hit 100 million streams across digital music platforms in 2019, obtained 200.000 subscribers on YouTube, and landed his music in the final season of the popular TV show Vikings. Early information: Singer-songwriter Mike Schæfer Olsen, (born in 1985, Brøndby, Denmark), transitioned to focus on music in the early 2000s and has been composing music almost continuously ever since, alongside doing radio shows and starting the indie label Fimbul Records. With a passion for songwriting running through his veins from an early age, Mike Olsen’s Viking-inspired music and dark melodies have broadened the Nordic folk genre and inspired millions of listeners around the world, bringing them back in time with a blend of his imagination and creativity. “A deep connection to his Danish roots and heritage fueled his interest in the Nordic Folk/Viking genre, prompting the creation of Danheim and his indie label Fimbul Records.”