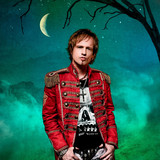 Avantasia is a power metal cum rock opera project founded and led by Tobias Sammet, lead singer of German power metal band Edguy. Since 2001's debut, the fantasy-themed The Metal Opera, Sammet has enlisted a who's-who cast of European and American metal musicans and singers for his albums. He crafted the name by combining the words "avalon" and "fantasia," which he described as "a world beyond human imagination." Each album in the Avantasia catalogue offers a different concept and narrative articulated by a core group and a plethora of guests, including Geoff Tate, Alice Cooper, Klaus Meine, Sharon den Adel, and Candice Night. The Avantasia signature is highly accessible metal with extremely high production values, and stunning vocals and harmonies. Avantasia was orignally conceived as a one-off studio project, an extension of Sammet's work with Edguy but also completely apart from it. Their 11-minute title single was issued in 2000, followed by the full-length albums The Metal Opera and The Metal Opera, Vol. 2 in 2001 and 2002 respectively. He revived the project by popular demand for 2007's The Scarecrow, and has kept up a schedule of intermittent recording and touring ever since. Avantasia's always sold-out tours are grand events utilizing not only a large cast of metal musicians, but also symphony orchestras, elaborate light and stage sets. Sammet spent a year composing the material for The Metal Opera, and recruited various vocalists to tell his story, including Gamma Ray's Kai Hansen, Stratovarius' Timo Tolkki, and Within Temptation's Sharon den Adel. The backing band featured guitarists Jens Ludwig (Edguy) and Henjo Richter (Gamma Ray), bassist Markus Grosskopf (Helloween), and drummer Alex Holzwarth (Rhapsody). The 2001 album,was filled with fantasy themes and anthemic, progressive pomp-metal. It was followed by 2002's The Metal Opera, Vol. 2 and a Eurpopean festival tour. Sammet put the project on hiatus for nearly six years -- as he worked and traveled with Edguy -- before reassembling a new version of Avantasia for the EPs: Lost in Space, Pt. I and Pt. II in late 2007, all the while composing a trilogy of albums known as the "Wicked Trilogy," comprised of 2008's The Scarecrow, 2010's The Wicked Symphony, and 2011's Angel of Babylon. Given the success of the world tours organized around the latter two records, Sammet became even more ambitious as a composer and conceptualist, deciding to make Avantasia releases even more epic in scale. In 2013, Avantasia issued The Mystery of Time, a full-scale conceptual collaboration with the Deutsches Filmorchester Babelsberg. The list of vocalists was impressive: Joe Lynn Turner, frequent collaborator and ex-Helloween frontman Michael Kiske, Saxon's Biff Byford, and Magnum's Bob Catley among them (sometimes two and three at a time). The album charted at number two in Germany, and in the Top Ten across Europe. It also entered the U.S. charts at number nine -- the first of the band's recordings to make the Top Ten. The outfit undertook another five-month tour, playing three-hour shows and selling out venues, as well as appearing at festivals in Europe, South America, Japan, Russia and Canada. The series culminated in a headline postion at the Wacken Open Air Festival, a performance Sammet claimed was Avantasia's last. (Granted, the claim was only in reference to live performances, as The Mystery of Time left an open-ended question in its narrative.) In January 2016, Avantasia released the sequel, Ghostlights. Many of the same singers returned and Sammet added to their numbers with appearances by Geoff Tate, Dee Snider, den Adel, and Ronnie Atkins, to name a few. The inevitable tour that followed pushed the album to number seven on the U.S. Hard Rock charts and at number 101 on the Top 200 as well as in the top 40 of a dozen other countries. (The first single, "Mystery of a Blood Red Rose" was a German candidate in the 2016 Eurovision Song Contest.) The band's tour concluded with a headline spot at

2017's Wacken Open Air Festival. In the aftermath, Sammet worked live and in-studio with Edguy, but was also composing and recruiting for the next Avantasia offering. In March of 2018, he posted artwork for the project's eighth album, Moonglow, that centered around