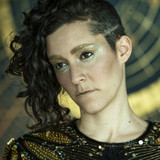 Iris Lune is an alt-pop indie artist mixing it up in Brooklyn, NY. Her mesmerizing sound feels at once familiar and peculiar, it draws the listener into a deliciously enticing new world. She is a formidable force as a powerful performer, songwriter and multi-instrumentalist. With three EPs and a an LP under her belt, the queer upstart has netted over a million streams across platforms to date, and has become a local live force, selling out shows in her newly minted home base of New York City. Her debut full length album, lovelosslove (released June 2020) was co-written and produced by Asher Kurtz (aka Old Feels). “ a microcosm of swirling, authentic stories [...] with a tinge of electro-pop to tie everything together.” - Billboard