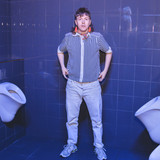 «Swallowing my own piss makes me feel all the colours in the life», sings Egge on his debut single. This sets the standard of his solo-project and defines what Egge is all about. Egge is a boy from Bergen, Norway, who left his job as a mailman and started up his musical carreer in 2019. He released his debut album Egge Stadium to great reception from Norwegian press. The biggest newspaper in Bergen, Bergens Tidende wrote: «Egge appears as a completely original in a world where even the alternative rock feels more and more streamlined and calculated,» and gave the album six out of six stars. In Norway he is well-known for his phenomenal live performances where he appeals to the audience with his rickety rock and desperatebut amusing lyrics. His next target is to spread his music internationally, and after a couple of years with hard work to eventually hit the number one spot at Billboard hot 100. Egge is a creative volcano and wants to release a lot of music. In september 2021 Egge will finally release his third album Destinys Child produced by his partner Comrade Tetris.