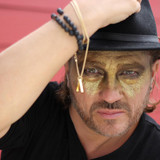 “Jon has one of the most dynamic and authentic voices I’ve ever come across in an artist.”

-Ron Alexenburg, former Senior Vice president of Epic Records Danish-born, LA-based vocalist and songwriter Jon Century is known for being reflective, an “emotional stripteaser” whose oeuvre is full of music that makes audiences think and feel alive—in genres spanning from hard rock, EDM to singer-songwriter. Century’s new single as a solo artist "Time" which is part of an upcoming album, takes on complex emotional themes. It dissects excuses from unfulfilled potential and sets the stage for an extraordinary, sonically and rhythmically eclectic nine-track album that will be released as singles throughout 2021. The album’s tracks are infused with adult pop/rock and electronica, making them seductive and driven thematically by a deep-seated social consciousness and a sense of hopeful emotional and spiritual reflection.Century’s powerhouse hard rock group, Into Century, signed to Sony Music Denmark in 2010, produced albums that earned praise from music media in Germany, England, Sweden, Spain, Norway, and Denmark and led to regular rotation on MTV and MTVu.