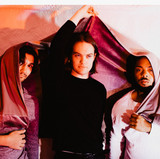 No Moniker is a band based in Richmond,VA, featuring Jordan Scott (vocals/guitar), Madison Hinson (drums) and Ro-Derrick Branch (bass).

After signing with Brooklyn-based label Good Eye Records in 2019 and putting out the EP Private Prophet, the band is releasing their next album, starting with the disco-influenced single “Either/Or” (feat. Shormey) “Leonard Cohen and Lou Reed make up the musical family tree which branches off to Moniker” - The Line of Best Fit   "Sounds like if The National and Courtney Barnett had a child" - Where The Music Meets