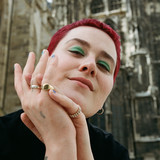 Producer, songwriter and artist Veronika J. Koenig feels comfortable outside of genre restrictions and fluidly finds her niche in all that is heavy in bass and intense in emotion. Her oeuvre under the moniker FARCE spans not only solo works, but numerous collaborations with likeminded peers: from Fauna to Wolfgang Moestl of Mile Me Deaf and, most recently, Clara Luzia for their split single Socialite/When The Streets. Reminiscent of acts like Robyn, LCD Soundsystem, MGMT or even A. G. Cook and Charli XCX, FARCE produces an enticing and rhythmic melange of violent experimental ideas. In the end, they always touch base in theatrical and flamboyant Pop. Around two years after a first EP with an impossible name (Ich sehe im vorbeifahrenden Auto den Unfall mitvorbeifahren in Zeitlupe und rueckwaerts, Meta Matter, 2017) Koenig released her more aptly titled debut album: Heavy Listening shamelessly requests the listener's full attention as only few contemporary pop records do. Designed as a conceptual journey from start to finish, it declares war on the much discussed death of the album and shows just how far a full, intentional body of work can go. Recently FARCE enjoyed worldwide airplay and critical acclaim with her danceable, yet dark EP ,,Trauma Bounce''. The single ,,Subway Surfer'' entered the FM4 Charts, as well as several rotations amongst European radio stations. A harbinger of a new full length record, the hypnotic ,,Meditation 4 2'' arrives in September of 2021.