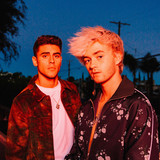 The meteoric rise of Nebraska-born and Los Angeles-based pop phenomenon Jack & Jack hinges on the lifelong friendship of Jack Gilinsky and Jack Johnson. That friendship translates to the undeniable chemistry at the heart of their music. A gold-certified single “Like That” [feat. Skate], a pair of chart-busting EPs—Calibraska [2015] and the conceptual Gone[2017]—and sold out headline tours positioned them for a major breakthrough only catalyzed further by the runaway success of their collaborative single with Jonas Blue, “Rise.” Not only did the crossover smash clockhalf-a-billion total streams in under six months and top charts around the world, but it also peaked at #1 in the UK and the boys teamed up with Blue for a show-stopping Wembley Stadium performance in front of 90,000 people. As “Rise” took off, they ignited Top 40 radio with “Beg” and performed the single on The Today Show.   To date, they have attracted 25 million cumulative followers across social media platforms, generated over 190million YouTube views, and garnered nominations at both the Teen Choice Awardsand The Streamy’s. Their mainstream breakout was chronicled by Forbes, Billboard, and Huffington Post, to name a few. In addition to sharing the stage with Shawn Mendes, Demi Lovato, and more, they have performed at the prestigious BBC Live Lounge and on ABC’s The View. Additionally, the twosome powered highly visible campaigns for brands such as Samsung, Verizon, Dell, Disney, and more.