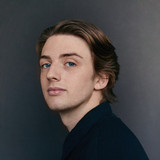 Roland Faunte’s first album “Sewing Kit” was written, recorded, and produced in his bedroom as a way to create an audible memory of recent tragic events in his life. He soon found himself receiving daily messages from fans all around the world who had been in similar circumstances and has since developed a sincere and heartfelt relationship with his enthusiastic fanbase, some of whom have gotten the album cover as a tattoo or have reimagined the music in other mediums such as painting or poetry.  His second album, “Needle and Thread”, opens up the second chapter in this story and offers messages of hope and encouragement alongside continued stories of the difficulties of living with a bipolar disorder.