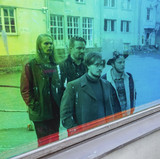 Second album "Fishriver Grand Prix" out October 15th! Aapo-Matti, Matias and Henri started jamming in 2017 at Hollywood House studios and immediately decided to record everything. Those late night jams resulted in their first self-titled album in 2018 which YleX and Soundi magazine among many others regarded as some of the best new rock music in Finland.  Now they return with a new album "Fishriver Grand Prix" and a new band member, Ismo on second guitar. The origins of the album goes back to summer 2019, when the band spent five days recording with a portable 8-track tape machine in a small cabin in Kalajoki. The race now finally comes to its' glorious finish. This "Tour de Rock" will take you from that cabin to hazy labyrinths, the steep hills of Mount Assiniboine and binge drinking in the streets of Kallio. Fishriver Grand Prix is a journey full of diesel smoke, dangerous curves and riffs the size of a grain-fed cow.