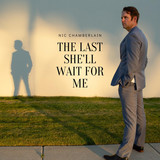 “The Last She’ll Wait for Me” is Nic’s most well-received song to date. And is the first in a string of songs for his second album. Songwriter, instrumentalist, vocalist, composer, and producer, Nic wears many hats well.   After serving as a missionary for his church, Nic spent his 20s pursuing a legal education and starting a family. His work as a free-lance drummer helped put food on a table filled by his wife and five children. After starting a law practice in his small

hometown, Nic did his best at a time when the nation was experiencing The Great Recession. Encouraged by his wife, he began recording an album in the basement of their home. Taking daily drives to nearby abandoned freeway ranch exits, he wrote songs and practiced guitar on his lunch breaks. Each night after the kids went to bed, he and his wife would record the album, he playing and singing the tracks, she engineering. Watch for the Wolves was a therapeutic album with themes of freedom and escape from mediocrity. That same year, Nic was invited by his long-time musician friend, Ben Hale, to play various parts in several tribute bands. Nic was able to woodshed his performing skills and stage presence for sold-out theaters in Canada and the mid-Western United States.   www.nicchamberlain.com Instagram: nicsband