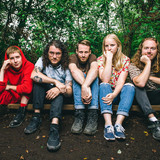 Following the 2017 release of "Plastic Cough", Great Grandpa were a unit, they lived together, worked together, and toured tirelessly across the country. As tours ended and band members relocated across the US, they found themselves suddenly separated and eventually isolated. The time spent apart wasn't planned, but it proved to be necessary. It was a chance to gain perspective into their lives, relationships, and creative purpose. Thus enters Four of Arrows, a creative turn toward introspection and Great Grandpa's collective result of rest and solitude. Undoubtedly, the 11 songs comprising Four of Arrows are a departure from the playful nods to pizza and zombies on Plastic Cough. The writing and recording process had evolved - less Seattle garage jams and more vulnerable solo songwriting sessions. Most of the songs on Four of Arrows were written in isolation by Patrick and Carrie Goodwin while traveling and living in the Midwest. The band instantly found common threads between their individual contributions, citing mutual love and admiration for vulnerable and emotionally resonate music. Four of Arrows embraces subtlety and pays close attention to the quiet. From the methodical dirge of "Dark Green Water" into the haunting and howling guitar of "Digger" - Great Grandpa try something new by letting the acoustic guitar and piano lay the foundation for many of the album's tracks. 'Four of Arrows' is out October 25, 2019 via Double Double Whammy.