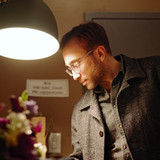 Jim Tews is a comedian, writer, animator, and director who’s been seen on NBC and FX, seen in the New York Times, heard on satellite radio, written a Times bestseller, and even animated a music video for Weezer. He performs regularly all over New York City, tours nationally, and sometimes even internationally. He’s a veteran of the U.S. Coast Guard (America’s most sensitive service) and went to film school for some reason. He lives in Ridgewood, Queens with his partner, two cats, and a dog with an underbite.