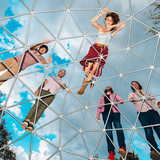 At the start of the decade, Austin’s The Deer arrived after an ampersand—they were the loose accompaniment behind Grace Park, a promising folk singer with a wounded sense of wonder. In the years since, Grace Park has become Grace Rowland and folded both her name and her cotton-wrapped soprano into The Deer, a quintet that pairs fiddle and piano with sharp but understated lead guitar. Across three albums, they’ve glided between various mixtures of folk and rock, sliding up and down the continuum between Mazzy Star’s skyward wanderings and Grace Potter’s torchy soul. They’ve succeeded mostly in jam-adjacent circles, filling festival lawns with hooks rippling through a narcotic haze. But The Deer’s fourth album and debut for Keeled Scales, Do No Harm, feels like the bleeding edge of a breakthrough, a country-rock dream machine somewhere between a jolt and a drift. The best of these 10 songs drape tapestries that could have been lifted from Beach House’s practice space across songs that occupy a space adjacent to folky musicians like Hiss Golden Messenger. Paisley keys, scrambled electronics, and warped mandolin lines soften the edges of would-be anthems, giving off a kind of omnipresent glow. Order vinyl LPs and CDs of their newest album Do No Harm at https://thedeermusic.bandcamp.com/ Find more at www.thedeermusic.com