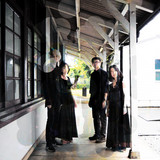 Anoice is a Tokyo based cinematic instrumental music group formed by multi instrumentalists; Takahiro Kido, Yuki Murata, Utaka Fujiwara, and Tadashi Yoshikawa. Their debut album 'Remmings' was released on Important Records, Boston in 2006. Anoice then released their highly-praised 3rd album, 'The Black Rain' worldwide in 2012, via their own music label, Ricco Label, and also Important Records in US and Flowers Blossom In The Space in Russia. In 2015, Anoice released the 4th album 'into the shadows' recorded in not only Tokyo, but also London, Paris, Warsaw, and Moscow. One of the album tracks 'old lighthouse' became the #1 trending track on Spotify as Japanese artists. In 2019, Anoice released three consecutive weekly singles in May, and then released the 5th album 'Ghost in the Clocks' made from lovely melodies and magnificent orchestral sounds in August. This album and each song within the album became the #1 and top 10 most streamed/downloaded instrumental music on Apple Music and iTunes in USA, Canada, Sweden, Norway, Finland, Germany, Spain, Russia, Belarus, Hungary, Latvia, Kazakhstan, Mongolia, Israel, Chile, Singapore, and Japan. In 2021, Anoice released their 6th album 'The Hidden Forest' after the longest ever production period in their history. The members of Anoice are also involved in various side projects such as; RiLF, Films, Mizu Amane, Mokyow, Cru, as well as other secret projects. Takahiro Kido and Yuki Murata also write and release work as solo artists.