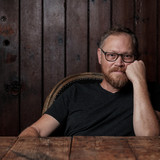 Andrew Peterson is one of most respected creative forces in the Christian music industry. With a folk-rock style and strong instrumental skills, Peterson’s career began in the mid-‘90s with an independent EP and tour partnership with Caedmon’s Call. He went on to produce additional albums and eventually sign with Centricity Music, through which he released Billboard Top 10 Christian Album Resurrection Letters, Vol. 2. By 2012, Peterson’s albums were consistently breaking into Billboard’s Christian Chart, along with the Pop Chart as well. In 2015, he released his 11th studio album, The Burning Edge of Dawn, which claimed the No. 1 spot on the iTunes Christian/Gospel Chart, plus the No. 3 ranking on the Billboard Christian Chart. A frequent collaborator with other musicians of the CCM community and beyond, Peterson has worked with such artists as Ellie Holcomb, Audrey Assad, and Andrew Osenga. Many of these partnerships have contributed to his annual Behold The Lamb of God Christmas tour, which has become an acclaimed, often sold-out holiday tradition. Beyond the music scene, Peterson founded and leads The Rabbit Room, a non-profit that supports artists of all varieties. He’s also an award-winning author, with four-part fantasy/adventure series The Wingfeather Saga and children’s book The Ballad of Matthew’s Begats to his name.