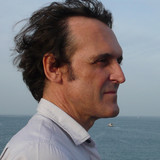 Spanish film composer Alberto Iglesias was born in San Sebastian in 1955. He spent his early years studying harmony and counterpoint in the city of his birth, later studying composition and piano in the studios of Phonos de Barcelona. Wrapping up his period of formal education, Iglesias formed a duo with fellow composer Javier Navarrete creating electronic music, touring and performing from 1981 to 1986. This spark for creative and unconventional techniques would come to characterize Iglesias' career. Thanks to personal connections made by his brother Jose Luis, Iglesias began working in the world film music in the mid-'80s, scoring films such as La Conquista de Albania (1984) and El Sueño de Tanger (1986). Though well liked by industry insiders, Iglesias' compositions had not found large audiences before his collaborations with Julio Médem, one of Spain's most influential directors. 1991's Vacas (Medém), followed by 1993's La Ardilla Roja formed an important alliance between Medém and Iglesias that would lift the young composer to new heights of renown. Thanks to the films' success and the quality of Iglesias' work, he was solicited for a number of projects throughout the '90s, including the national hits Los Amantes del Circulo Polar (1998) and Pedro Almodóvar's Todo Sobre Mi Madre (1999). The latter marked the beginning of an important partnership with Almodóvar, as well as Iglesias' arrival as an internationally recognized voice in film music. This hard earned reputation was further established with the award winning score for Talk to Her, followed by La Mauvaise Education. Iglesias' impeccable work was introduced to U.S. audiences via his Oscar-nominated score for The Constant Gardener. ~ Evan C. Gutierrez, Rovi