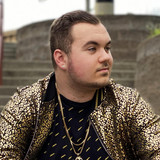 A DJ and Producer from the Portland, area, DJ Stretchman never fails to take a party to the next level. Born Lucas Strelchun, Stretchman's music has been known for his wide range of musical genres. Stretchman began his early career releasing house music originals and remixes and DJed at local parties around town. His music career truly began to take off in January 2019 with the release of his hit single 'Don't Stop' which aired on Sirius XM's BPM. Later in 2019, he began to diversify his portfolio with pop and hip hop tracks in addition to his usual EDM. Stretchman said he loves to "create music that helps decipher and channel [his] emotions in hopes that others can receive the same feeling [he has] when hearing it".