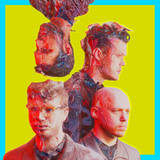 The new album RE-ANIMATOR is out now. Everything Everything are back to what they do best - making beautiful, provocative, literate, status quo-challenging, mood-enhancing, twice-Mercury-nominated music. Back to everything Everything Everything ever wanted to do. Back to big-thinking, big-tune brilliance, and forward to Re-Animator (11th September 2020), the fifth album by Jonathan Higgs (vocals, guitars), Jeremy Pritchard (bass), Alex Robertshaw (guitars, keyboards) and Michael Spearman (drums). Prepared for like a marathon (a year’s worth of writing and demoing) and nailed like a sprint (a two-week recording burst), Re-Animator is the sound of a band entering a new creative chapter, a new set-up (with their own label deal with AWAL), a new explosion of life. As the band point out “The title Re-Animator is not-insignificant,” of an album recorded with producer John Congleton (St. Vincent, Anna Calvi) in London’s storied RAK studios in a purposefully focused fortnight in December 2019. “If you want to link it to anything we’ve done before, there’s a regained innocence and wonderment that was on our first record," he says of Man Alive (2010), which was succeeded by Arc (2012), Get To Heaven (2015) and A Fever Dream (2018). “And the colour of it is similar. The three albums that followed were about looking at the state of the world, and this one again is about… Well, yeah, wonderment is the word that keeps coming up.”