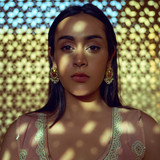 Kamakshi Khanna is a Delhi-based singer/songwriter whose music draws inspiration from diverse influences ranging from RnB and Soul to Pop and Indie Folk. She gained recognition with the release of her EP, Much Mellow in 2014, and her full-length album, Cakewalk in 2017. Her first Hindi single (Released under Artist Originals) has been a massive success with over 1.7M views on YouTube and over 800K+ audio streams across platforms. Kamakshi’s journey is one of conscious reinvention as she continues to embrace new styles, and experiment with her sonic identity. An over-thinker and daydreamer, most of her ideas come from sudden spurts of introspection inspired by her lived experiences and her tendency to attach emotional depth to the mundane. For a lot of her listeners, her music embodies strength in vulnerability and her songs are perfect ear worms for solitude and reflection. Kamakshi established herself in the Indie music scene with numerous live performances across the country at major festivals (NH7 Weekender & Vh1 Supersonic) as well as intimate concerts (House Concerts, Sofar Sounds). In 2018, she performed a solo US tour across cities like New York, LA and Austin. She also appeared on Season 1 of India’s first English singing reality TV show, The Stage, and finished as one of the top 6 contestants.