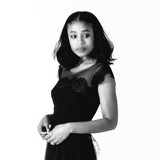 A Nashville-based singer/songwriter who spins dark-hued tales of life in the Deep South, Adia Victoria earned critical acclaim for her gothic indie blues following the 2016 release of her Atlantic-issued debut Beyond the Bloodhounds. Over the next two years, Victoria took breaks from touring to issue a French-sung EP and another of classic blues covers before recording her 2019 follow-up, Silences, with producer Aaron Dessner of the National. Victoria was one of five children raised in a committed Seventh Day Adventist family. Growing up in South Carolina, she attended religious school until shortly before sixth grade, after which her mother moved her to public school where she developed introverted tendencies. During her high school days, Victoria took to writing poems and short stories and became a voracious reader with tastes ranging from Flannery O'Connor to Angela Davis. Following high school, she spent some time living in New York City, but eventually left for Georgia where for her 21st birthday, a friend gave her a guitar, setting off an intense interest in music and a fascination with vintage acoustic blues. After a period spent traveling in Europe, she settled in Nashville and began writing her own songs. Absorbing the sounds of the South -- rural blues and vintage country -- and interpolating her literary influences, Victoria soon became a common presence on the Nashville club scene and attracted a devoted following. Working with producer Roger Moutenot (Yo La Tengo, Josh Rouse) she released her debut single, "Stuck in the South," in 2014, earning positive reviews and enough exposure to land a deal with Atlantic Records the following year. Victoria's debut album, Beyond the Bloodhounds, arrived in May 2016, garnering critical acclaim and kicking off two years of hard touring in support of the release. A pair of EPs appeared in 2017 beginning with How It Feels, which was sung entirely in French, followed by a short set of blues covers called Baby Blues. Working with the National's Aaron Dessner at his upstate New York studio, Victoria recorded her follow-up LP, Silences, which was released in early 2019 via Canvasback Records. ~ Mark Deming, Rovi