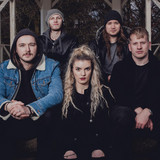 Sertraline are a progressive metal band based in Leeds & Manchester, UK. Formed in 2014, their journey has seen them establish a reputation as a band who sound fierce on record and with a mesmerising live performance. Sertraline’s most recent release ‘Clouded Minds & Silver Lines’ (May 2020) has proved to be the band’s most successful offering to date. With over 90,000 streams on Spotify alone and reviewers hailing it as “a record of the year contender” (Rock Sins), the band have firmly established themselves in the UK underground scene. A back catalogue of festival appearances that include UK Tech-Fest (2019), BLOVE Festival (2019) and Bloodstock Open Air (2018) have seen Sertraline bring their high energy show to audiences across the UK, gaining a loyal fanbase along the way. Sertraline have been announced for Takeover at Download Festival 2022 and featured on #DownloadTV in place of the cancelled 2020 edition. The band recently announced the departure of frontwoman Lizzie Parry, with two new singles closing out her chapter with Sertraline. 'Vivid' drops on Friday 24th September 2021. A replacement vocalist will be announced soon. This will be the start of a new era for Sertraline. For fans of Spiritbox, Architects & Polaris