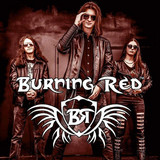 BURNING RED Twin siblings Michael Gavrizescu, Denise Gavrizescu, with Jason Kaplan ... The band takes rock music across every generation and blends it together to form a revolutionary reformation of the genre with the power to satisfy all audiences young and old. With this, Burning Red is a force to be reckoned with. Crowds have considered Burning Red to have an energy even more engaging live, putting on an electrifying stage show that draws the audience in. Making them feel involved with the experience. ​The band tugs the audience's heartstrings in all directions with hard-hitting songs like "Don't Let Go" and "Apocalyptic", as well as emotional power-ballads like "Take Control" and "Hope". Burning Red has since written and recorded their debut self-titled five-track EP published under Fanoti Productions in December 2015, and released their first full length album "Apocalyptic" in 2019. Throughout the United States, as well as in Asian countries including Japan, China, and the Philippines, the band has made a name for themselves. In 2016, Burning Red has been recognized internationally by the Asia World Class Excellence Awards as the "Best New Rock Band". With their passion and unstoppable drive catapulting the band ahead, Burning Red is determined to take their innovative style around the world for all to hear, and prove their reputation as an amazingly powerful live band.